Welcome to 2017, the year of controversy. I mean, really - I have never remembered a time where the world was centered around so much controversy. And it all boils down to one concept in my mind - doing the right thing. And how one person’s version of ‘the right thing’ does not always mesh with someone else’s version. Hence - conflict and controversy, he said she said, my interpretation versus yours. It’s EXHAUSTING but a very real part of our lives.

I can’t believe this is actually still around but it is and with the NFL season starting this week, thoughts are hot on to kneel or not to kneel. The most prevalent player that I feel has sparked the controversy is Colin Kaepernick. Kaepernick first refused to stand during “The Star-Spangled Banner” on August 26, 2016 in what he deemed protest of police brutality and racial injustices. Exercising his First Amendment right. Doing what he felt was right. 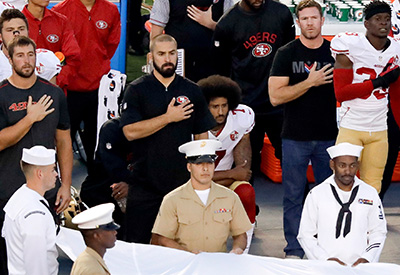 Others deemed his protest as a sign of disrespect to the American Flag and our armed forces. That using the platform of ‘his job’ was not the appropriate place to have a peaceful protest, that in fact his decision to kneel during the singing of the National Anthem was in fact a sign of disrespect.

I think there are two sides to every story and a lot of it depends on whom you are as a person and what your individual set of beliefs and values are. What I think is a travesty is the amount of time that nationally has been given to this issue when there are professional players from every sport that invest large amounts of time and money and support to charities and organizations that are doing amazing things in the world. THAT is where I wish our focus with these athletes would be. There are many that are tremendous role models, truly making a difference off their field of play. And we hear nothing. Crickets.

The Dakota access pipeline has caused lots of controversy over the course of the past year. The pipeline is a multi-billion dollar project that would carry mass amounts of oil daily from western North Dakota to Illinois. The pipeline would not only create several thousand jobs during the construction phase but would also bring millions of dollars into local economies. 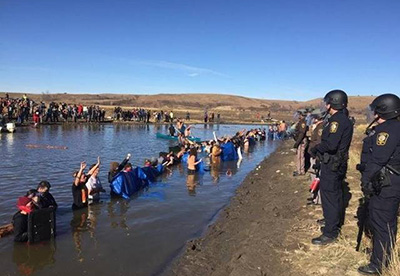 The Standing Rock Sioux Tribe does not see the same side of the coin. The Tribe says the pipeline is a cultural threat as well as an environmental threat. Part of the pipeline would cross under the Missouri River and if the pipeline ever broke in or around where it crosses, the damage environmentally would be catastrophic. Also, the North Dakota Pipeline would also travel across ancestral lands.

Again, two sides to every story. We are at a time where jobs are crucial and necessary and rebuilding the economy in local towns and cities can go a long way to help improving education for these localities as well as providing a boost to struggling mom and pop style businesses. The pipeline will be built through farms which is less than ideal for farmers and let’s not forget that the Standing Rock Sioux Tribe has a right to want to preserve their ancestral land and be concerned about the environmental effects of the pipeline. One’s sense of right does not outweigh the others.

Social networking is a major part of every business, every individual, every family. We shop, we meet our spouses, we talk about our perfect lives, literally use some sort of social networking for a portion if not the majority of our days. It’s helped us to find jobs, find the perfect house, learn how to fix a leaky toilet and how to diagnose an ailment. We can search for the best price, learn about exotic places, get phone numbers, find ancestors and oh so much more. Super duper social networking! 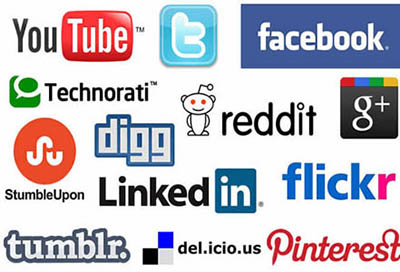 It also puts us at jeopardy. Social networking puts us in contact with people that might just be not a good idea, strangers that maybe don’t have the best of intent. It makes us prone to losing part of our privacy, our identity and compromises our social and individual security. We can get hacked, get exposed and so many not so nice things - all because of social networking.

This is the age of technology. The vast majority of what our individual, family and professional lives revolves around is technology. Schools rely on it, our jobs require it and our children - they are obsessed with it. You can try to prevent all you want but there are certain circumstances where you just can’t hide from social networking no matter how much you’d like to. Toss up.

This is a big issue nowadays, especially for those of us with children. Not to say that back in the olden days when I was a kid that it wasn’t an issue but I think it is simply a different world. Kids are left home alone more, parenting styles are different, temptations are different and they have access to so much more - right at their fingertips. Let me explain.

Everyone gets a trophy

Back in our day, there were winners and losers. That’s it. You won the game or you lost the game. Maybe there was an MVP or something along those lines but for the most part it was simple - winner or loser. Today, well now today, EVERYONE gets a trophy. Maybe even everyone and their dog gets a trophy if there are extras left over because you know, Murphy DID attend every game. 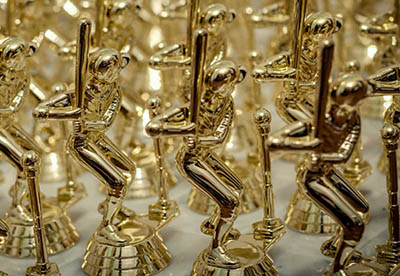 Is that right or wrong?

That’s up to personal opinion. I’m of the belief that children need to learn that there are winners and losers. And if you have given yourself for a worthy cause and won the game, that is deserving of the title of winner. You take away from the glory of winning if the winners and the losers get a trophy. What is the point in participating?

Oh lovely lovely lovely social media. That glorious creation that allows you to say whatever you want, be whatever you want, do whatever you want - all from the privacy and safety of your screen. Send a mean snapchat? It gets erased. Make a snide comment on Facebook about the coworker you don’t like? Your interpretation. Say something nasty about a friend in a text that you would never say to their face? All that happens all the time. However it also helps us to connect with others say that are going to the same college, reach out and send kind words to a colleague, create connections that make a difference. 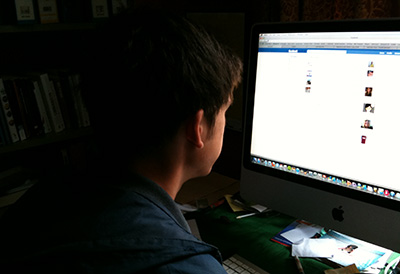 Is it right or wrong?

This is a hard one. I would like to say that children especially should be kept from social media and technology until they are mature enough to handle it. But I know some adults that probably should give social media a time out for awhile. And what it is stripping us of and our children of is accountability. I have told my children from a very early age that you don’t put something in writing that you aren’t willing to say to someone’s face. And heaven forbid you put it in writing be prepared to be called to the carpet on it. It’s easy to be brave from a keyboard but if we don’t teach our children and practice ourselves the concept of ‘mean what you say and say what you mean’ and be accountable for it - we will continue to perpetuate the cycle. Is it the right thing to use? Sure - as long as you are not using it for the wrong reasons.

The Right Thing as I know it

Funny how things happen as this literally was my day yesterday. Driving home from dropping my oldest son at boarding school, less than a mile from my house when I saw a cute little turtle trying to cross the road. Like any good Samaritan, I turned into the closest driveway to go back and help said turtle get safely to the other side. And promptly backed into the homeowners mailbox, knocking the mailbox itself right off the post. There was no one home so I put the mailbox on the porch along with a note apologizing for hitting it and asking them to please call me so that I could take care of fixing, paying for a new one, whatever they wanted. Went back to find the turtle but he was gone.

Wouldn’t you know I got a call that evening from Larry, the homeowner. He told me that he was able to fix the mailbox good as new, no charge to me and that he was calling to thank me. “Thank me? For what?” Larry said that he appreciated that I took the time to put the mailbox on his front porch. And he appreciated me leaving a note and explaining what had happened (note: I even told him about the turtles). He was calling to thank me for DOING THE RIGHT THING. And, it so happens, he is a turtle saver too.

My brother and his wife are very big on doing the right thing. Way back in September of 2016, in the midst of the Kaepernick controversy, my brother decided to do the right thing. He neatly packaged up his Kaepernick jerseys, all five of them, along with a letter that he had written to the owner of the San Francisco 49’rs. In this letter he stated that he, his wife and his children could no longer wear the jersey bearing the name of Kaepernick and that he would like to respectfully return them. He further went on to explain that he had been raised to respect our American Flag as well as show respect for the National Anthem - standing at attention with hand over heart. In his eyes, the right thing to do was to return the jerseys to the owner in support of his own values and upbringing. 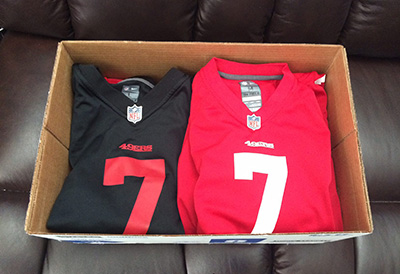 I was home this past year and got the opportunity to see one of Casey and TanDee’s children participate in an activity they love. And in talking with TanDee, it came up that the team was a little smaller this year. I asked why and she explained that a couple of the kids had transferred to a different team this season, a team with a better winning record. And that her player had asked about doing the same. Because let’s face it - winning is a lot more fun than losing. I asked her how she handled it and she said she explained to her player, her child that where she had no problem with what the other families and their players had chosen to do, that was not how they as a family did things. And that they would continue on with the team they started with, no matter the wins or losses. Because to her, that was the right thing to do.

So at the end of the day, what is the right thing? I mean, where the heck is the book that I can buy that tells me what is right and what is wrong? It’s individual, it’s personal. I tell my own children that there is a difference between butterflies and being nervous versus that little voice that creeps in your ear and whispers “Are you sure you want to do that?” Choosing what is right is what defines your character. And character, not circumstance, is what makes the person.

Don’t do the easy thing. Do the RIGHT thing. 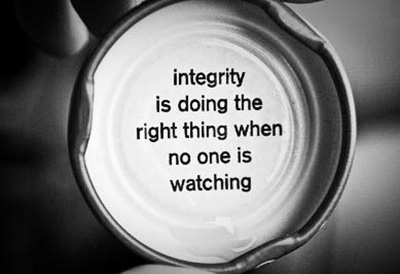